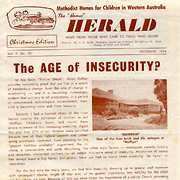 Initially this started as a hostel for working girls from Indigenous backgrounds but also went on to provide residential care for boys ans girls in a hostel setting.

Warminda commenced operations as a hostel following the injection of funds for such accommodation that arose from the Constitutional amendments of 1967. A Central Division [of the Department of Native Welfare] request for another working girls’ hostel was made in September 1967. “The present Warminda site was purchased by the Department [for Native Welfare] in March 1968 and the Methodist Homes for Children entered an agreement to manage this hostel along similar lines to its other hostel at Cooinda…the Department considered changing Warminda to a working boys’ hostel in 1969, but this plan was discontinued when it was suggested that a boy’s hostel be purchased at Como (the future Kyewong [see entry]).” Wilson and Robinson (1971) Aboriginal Hostels in Perth: A Comparative Survey.

Education and employment hostels were operated by or in association with the Native Welfare Department mostly from the mid to late 1960s and early 1970s but came under the administration of the Community Welfare Department from 1972. For notes on a general history of these facilities prior to 1972, see Volume Three “History of Aboriginal Hostels” and Volume 1 “Education and Employment Hostels”.

The WELSTAT (welfare statistics) Collection of 1979 notes Warminda as a ‘scattered group home’ (ie. “a family group home whose grounds do not adjoin those of another family group home, or other residential child care establishment, operated by the same enterprise.”) that was operated by an agency other than the Department. Facility operated by Mofflyn under a formal agreement with the Department of Community Welfare, providing for 10 primary and secondary school children in 1979.
Group Homes were established by the Department “for children who need a more specialised type of family care than can be provided in a normal foster home or boarding placement. The children placed in these facilities are not necessarily problem children, but because of their circumstances they would find it difficult to settle into a private family. The Departmental group home can provide a skilled and stabilising environment as a stepping stone to future return home or foster placement” (Annual Report of the Department for Community Welfare, June 30th 1974). For notes on a general history of these facilities, see the section on Group Homes at the beginning of Signposts.

9 children in residence at June 30, 1975 (all being Wards). At this time, Warminda provided generally longer term care for boys and girls aged 5-16 years, but did take children for shorter periods if necessary. Warminda had a garden, play area, swimming pool, swings and slides, barbeque, tennis courts, one pet, a basketball court, bikes and a range of sporting equipment. Children were encouraged to build their own cubby. There were 4 bedrooms – 1 single, and 3 that could sleep three or more children; 2 bathrooms and 2 toilets for the children; 3 staff bedrooms and separate lounge and ablutions; and a verandah; a TV, radio or radiogram, fish tank, library, magazines, books and toys were available. Homework was completed after school and children generally took their lunch to school except one day per week when they could buy their lunch; the trip to school was made by bus. The average length of stay was 1.26 years. Holiday placements were actively sought for the children. Recreational activities included camping trips, swimming and drama club and other activities arranged by cottage parents. The building was 15 years old in 1975 and was described as a ‘modern’ residence, of brick construction and fitting in well with surrounding premises. (Department of Child Welfare Submission to the Committee of Enquiry into Residential Child Care, July 1976).

Warminda became one of a new breed of services in the 1980s, replacing Andrew House which had been situated on the old Walcott Centre site at the corner of Walcott and Lord Streets in Mt Lawley. In September 1983, Bridgewater amalgamated with the Walcott System to form a new system of residential care and community support. In January 1984, the new system was named the Community Support Hostels, and Bridgewater became its Administration Centre. The Community Support Hostels comprised Darlington Cottage, Oceanview, Stuart House, Tudor Lodge, Warralea Hostel, Kyewong Hostel, Medina Hostel, Warminda and the Bedford Park Hostel [see individual entries]. The role of the Community Support Hostels was to “provide skilled care for children for whom a more normal setting, such as an emergency foster home, is not available.” (Annual Report of the Department for Community Welfare, 1984).

By 1985, the Annual Report indicated there were seven Community Support Hostels in the Perth metropolitan area, and their individual roles and goals were “varied, complex and often quite different in nature.” However, the “basic aim” of the Community Support Hostel system was to “identify and understand problems being experienced [by the children admitted to them], then to provide support and direction towards re-establishing routine involvement in community activities.” At the same time, the hostel staff emphasised “behavioural stabilisation and training to increase the chances of success in activities involvement and subsequent placements.” (Annual Report of the Department for Community Services, 1985).

In 1987, it was also reported that “children on arrest or remand who cannot return home” were also admitted to Community Support Hostels. (Annual Report of the Department for Community Services, 1987).

The Department’s Hostels Education Activities Resource Team (HEART) operated from Warminda for several years from 1987, until the facility was transferred to the Department of Justice in July 1993.

If anyone has any photos of this Home could you please send it to CLAN.