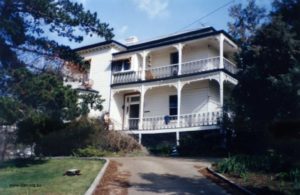 The Salvation Army opened its Launceston rescue home for women in May 1895, in the ‘Te Aro villa’, in Charles Street. Initially, the Home had room for 8 inmates. It was managed by Major and Mrs Gover of the Salvation Army.

Addressing the opening ceremony, Major Gover said that ‘the need of a rescue home in Launceston was an evident fact’. Commissioner Coombs of the Salvation Army spoke about how the Home planned to rescue and reform the women:

‘It is an integral part of the scheme to watch the inmates closely after they leave the home. They will not be allowed to drift back to their old habits. In the home they will be fitted for situations, and when qualified these will be found for them as far as possible from their old surroundings and in suitable families … The girls will thus be watched and looked after from the moment they enter the home through all the subsequent stages of their life (Launceston Examiner, 7 May 1895, p.6)’

The Salvation Army intended to make the rescue home self-supporting. Coombs said that ‘it is a sine qua non that inmates must work’. He stated that the Salvation Army had experience in other cities working with ‘fallen women’, and changing them into ‘useful, honest, virtuous and upright citizens’.

By July 1896, the Rescue Home had moved into new, larger premises in William Street, Launceston, a building owned by William Hart MLC (Launceston Examiner, 18 June 1896, p.5). In November of that year, Major Gover updated the public about the work of the Home. Since opening, it had received 38 ‘girls’ and 25 children. Of these inmates, 20 had been sent to situations, and 3 to live with friends; 2 had died; 1 had married; 3 had left the Home and 8 remained living there. Gover said that ‘only 3 had proved thoroughly unsatisfactory’ (The Mercury, 17 November 1896, p.3).

The Rescue Home moved again in 1900, to ‘Rock Lynn’, in Connaught Place, South Launceston, described as ‘a fine, healthy site’ on the Cataract Hill (The Mercury, 26 March 1900, p.3) The official opening took place 25 March 1900. The Salvation Army’s newspaper, The War Cry recorded that:

‘During the tour of inspection many were the expressions of admiration of the lovely red and white mottoes, the beautifully marked pillow-shams, and the Army flags, the only decoration of the place. Quite a halt was made in the pretty nursery, with its rows of cots, snowy-white marcella quilts covering the sweetest of babies.’

Originally there was accommodation at Rock Lynn for 20 young women and 4 officers. In 1920, an extension enabled the home to take up to 30 women.

Rock Lynn House was not an official adoption agency, however many of the babies born there were adopted. The institution was mentioned in a hearing of the Senate Community Affairs References Committee in Hobart in 2011, as part of the inquiry into Commonwealth contribution to former forced adoption policies and practices.

A 1928 article described the work of Matron White at the ‘Mothers’ Hospital’: ‘Matron White deals with the many difficult cases which come under her care … She handles any court cases on behalf of the girls, finds situations for those who have no homes to go to, and endeavours to get the babies adopted, or arranged to have them boarded out’.

The article also stated that, unlike similar institutions on the mainland, Rock Lynn received no government subsidies (The Mercury, 30 August 1928, p.7). At Rock Lynn, the mothers’ laundry work provided financial support for the Home.

In 1935, The Mercury published an article about Rock Lynn and the retirement of its long-serving Matron A. White. It provided more information about sources of revenue: sometimes a young woman’s parents would pay the Home to take her in. The Home also received some money if an inmate was a ward of the State.

In the 1935 article, it stated that it was not only young mothers admitted to Rock Lynn. Sometimes, young women ‘regarded as uncontrollable’ were sent there from the courts. These ‘girls who are taken there to be controlled’ were accommodated separately from the mothers’ (The Mercury, 6 November 1935, p.5).

In 1937, another new dormitory opened. At that time, the average age of the mothers was 17.

The Home appears to have suffered from two boiler explosions. The first, in the laundry, was in January 1946. Much of the laundry, which was attached to the home, was destroyed. Following another explosion which occurred in the 1960s, it was said that all the home’s records were lost (Commonwealth contribution to former forced adoption policies and practices, Official Committee Hansard, Friday 16 December 2011, Hobart)

However, since that time it has been confirmed that some records from Rock Lynn House do still exist, and are held by the Salvation Army Australian Southern Territory in Blackburn, Victoria.

In 2012 Rock Lynn is a boutique hotel. The owners have converted the laundry buildings into apartments.

If anyone has any photos or information relating to this Home, could you please call CLAN.