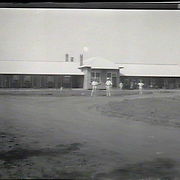 In May 1928 the property was transferred to the Child Welfare Department and became a home for delinquent boys, the Riverina Welfare Farm. Further accommodation facilities were erected to house a total of 128 boys. The Department of Agriculture continued to conduct crop trials on the property during this period.

In 1942 the Riverina Welfare farm ceased operation and the boys were transferred to Gosford. The property then became POW Camp 15, which eventually held over 700 Italian prisoners of war. The farm was still managed by the Department of Agriculture and the prisoners grew vegetables to assist the Allied war effort. The property was handed back to the Department of Agriculture in 1947.

Between 1948 and 1951 the farm was used partly for the training of returned soldiers under the Commonwealth Rural Training Scheme.

In 1961 it was decided to establish an agricultural college on the site, and Yanco Agricultural College commenced operations in 1963 with a full initial intake of 38 students studying a 42-week Farm Certificate Course.

The number of courses offered and the number of enrolments increased over the years as the college expanded and more student accommodation became available, and in 1980 the name of the college was changed to Murrumbidgee College of Agriculture. The college continued to offer residential courses in agriculture until its ceased operations in 2003.

The Murrumbidgee Rural Studies Centre took over the short courses previously offered by Murrumbidgee College of Agriculture, and it continues to provide a wide range of courses to farmers, consultants and other members of the community.

In 1928 the Yanco Experimental Farm, controlled by the Department of Agriculture was accepted by the Child Welfare Department as a site for a Training Farm for delinquent boys. (1) On 4 July 1928, in pursuance of provisions of the Child Welfare Act (No. 21, 1923) the farm was proclaimed “an Industrial School for reception, detention and maintenance of children”. The farm was known as “Riverina Welfare Farm for Boys, Yanco”. (2)

The Yanco farm provided more accommodation than the Gosford Farm Home for Boys and in contrast to the Gosford home, the soil was suitable for agriculture. The site occupied an area of 2043 acres and in addition to the farm included a 50 acre orchard, garden and grazing paddocks and a stud cattle breeding programme.(3)

By 23 June 1928 a party of boys had transferred from the Gosford Farm Home. (4) They were accompanied by the Superintendent of the Gosford Home, Major Arthur Parsonage whose former position at Gosford was filled on 26 July 1928. (5) Initially, boys aged 18 or close to that age who were approaching the end of their sentence and who had received their parents’ permission volunteered for inclusion in the new project. Those selected had responded to the training programme at Gosford. The scheme was not available to those who had been sex offenders. The purpose of the project was to give the boys basic training in agriculture over a period of 12 months. It was felt that the opportunity for close contact with farming families, and the acquisition of workplace skills immediately prior to their release from custody would prepare them for integration into the community. (6)

Officers of the Department of Agriculture were employed to instruct the boys in farming techniques. All boys received training in a range of farming activities – work in the dairy, garden, orchard, farm, the methods of irrigation and dry farming. The Farm became a successful sheep breeding establishment preparing the boys to pursue shearing or wool classing as occupations. Tomatoes and peas were grown for a local cannery and there was a large vegetable garden. (7)

From 1932, some male wards from the Child Welfare Home at Mittagong entered the project to alleviate the overcrowding caused by the closure of the Royleston Children’s depot. (8)

A new dormitory building constructed with the boys’ help between 1933 and 1936 increased the accommodation capacity from 150 to 200. (9)

From the middle of the 1930’s a majority of the boys were of lower than average intelligence and school teachers from the Department of Education were employed to help boys with their general education and manual skills. (10)

The Riverina Welfare Farm was taken over by the military authorities in March 1942 and on 13 March 1942 the 39 boys in residence at Yanco were transferred to the Gosford Home.(11) Evidence suggests that some boys remained in residence until at least 20 March, 1942 when records indicate boys at the Home were attended by a Doctor. (12)

A proclamation on 16 August, 1946 established and constituted the institution as a school “for the reception, detention, maintenance, discipline, education and training of young persons committed to such institutions”. It was to be known as “The Riverina Welfare Farm for Boys”. (13) The home never re-opened as a child welfare centre.