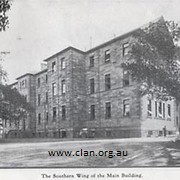 The Society for the Relief of Destitute Children opened Ormond House in Oxford Street, Paddington for the reception of needy children in 1852.

The children were normally between the ages of three and ten years and not eligible for admission to the Orphan Schools. Every child admitted (including voluntary admissions) was to remain the responsibility of the Institution until aged 19 or, in the case of a female marrying earlier, until her marriage.

The Asylum for Destitute Children relocated to Randwick in 1858. A building to accommodate 400 children was constructed on the site.

The Randwick site included a farm where the boys learnt farming skills. Many of the boys and girls became apprenticed to the Institution when they reached 12. The children received a basic education. From 1877 they received a State education from teachers from the Council of Education.

The State Children Relief Act, 1881 authorised any State child under the age of twelve to be removed from an Asylum and boarded-out. The Asylum began boarding-out children in 1883.

The Government ceased funding the home after 1888 and no longer used it to accommodate State children. Some children who were supported by their parents remained in the Asylum.

The premises were increasingly under-utilised until it was taken over by the Federal Government during World War I as a military hospital for wounded and disabled returned servicemen. In April 1915 the children remaining at the Asylum were sent to cottage style institutions or boarded-out.