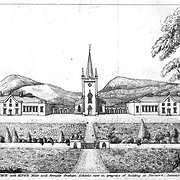 The first Children’s Homes for the orphaned, destitute and neglected children of Van Diemen’s Land began in 1828 with the establishment of the ‘somewhat Dickensian’ government-run King’s Orphan Schools. Agitation by Benevolent Societies in the 1850s and 1860s over the many street children known as ‘City Arabs’ resulted in two Acts in 1867 which enabled the establishment of training schools for young offenders, and industrial schools for homeless, destitute, or orphan children.

Until the establishment of the Boys’ Training School in 1869, delinquents as young as eight or nine commonly went to gaol. After half a century of providing mass care for children, the government orphanage closed in 1879, unlamented. Numbers had dropped since 1862 with the introduction of outdoor relief to some families, and the Boarding-Out Scheme as an alternative to institutional care. Efforts were now being made to keep siblings together in foster homes and to apprentice them near each other in service employment, and the antiquated approach of the King’s Orphan Schools was out of touch with ‘more modern’ social standards.