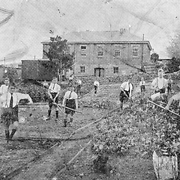 Opened in 1869 by Alfred Kennerley, a prominent Hobart citizen, councillor, one-time Lord Mayor of Hobart, and philanthropist. The school also took in residents from outside Hobart. The Industrial Schools’ Act and the Training Schools’ Act of Parliament had been amended in 1867 to enable children `found to be begging, vagrant, in the company of reputed thieves, orphaned, deserted or declared Uncontrollable’ to be admitted into the Boys’ or Girls’ Industrial Schools, or in the cause of offenders, the Training Schools, or Reformatories as they became known. The Industrial Schools were intended for children 10 years and over.

For babies and young children who were either orphaned or unable to be cared for by a parent, the Boarded Out System was introduced. Government money was paid to foster parents who were tightly controlled by the Social Welfare Department. Most of these children were eventually sent to Industrial Schools to learn a trade and earn a living. The foster parents were chosen from the working class of society who were deemed needy of the money; in some cases, they were related to the children. For families where there wasn’t an income and who were deemed worthy of charity, the Social Welfare Department would be given what was known as Outdoor Relief. The amount of money given was determined by the number of children in each family under the age of 12. Children over the age of 12 were expected to be apprenticed or in the work force with wages given to their families.

In 1969 the old institution was sold and 4 large 6-bedroom cottages were purpose built to house boys and girls in need of long-term care. The inclusion of girls at this stage meant that brothers and sisters could be kept together, this brought about a change of name to Kennerley Children’s Home.

The Annual Reports of the home are held in the Tasmania Library.