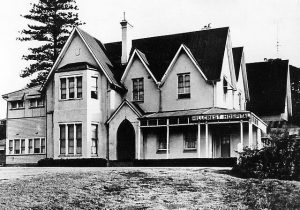 Hillcrest was built in the early twentieth century, following the Western Australian gold boom, when the wealthy elite were establishing large suburban residences with marine views to the Swan River and Indian Ocean. Converted to a maternity hospital for unmarried mothers in 1922, it was enlarged to provide additional accommodation in 1934, as Western Australia began its recovery from the Great Depression.

Hillcrest provided maternity care for unmarried mothers and their babies for more than 50 years from the 1920s, when they were seen as social outcasts, through gradually changing social mores to the early 1970s, when much of the former stigma had gone and single mothers were generally accepted, and played an important role in the training of mid-wives prior to establishment of a program at King Edward Memorial Hospital. Hillcrest has played a role in providing care facilities in Fremantle through its provision of maternity care to married women at various periods, and, since 1978, through provision of hostel, nursing home and day care centre facilities for senior citizens.

In addition to caring for un-married mothers during their confinement,
midwifery nurses’ training was commenced at The Salvation Army Hillcrest Maternity Hospital, as the place was officially known, a significant initiative in the period before King Edward Memorial Hospital commenced training midwives. A photograph on the certificate awarded to Mabel Muldoon on completion of her year’s training in July 1923, shows Hillcrest viewed from the east, the imposing tower above the main entrance, with a single bay to
the right, and the open verandah to the left. Around the same period, a photograph of hospital staff at the eastern entrance steps, shows the abovementioned marble plaque mounted on the wall at the right, and in the rear ground may be seen the detailing of the main entry doors with their original leadlights.

In the mid-1920s, Wise’s Post Office Directory listed the place as the
Salvation Army Maternity Hospital in at Harvest Road (cnr. Turton Street), North Fremantle, with the nearby Salvation Army Emigrants’ Hostel also in Harvest Road, which became the Salvation Army Women’s Retreat in the late 1920s.

In the 1930s, there were two categories to the work of the Salvation Army at Hillcrest, the first being for un-married mothers, whose babies were generally adopted out with the assistance of the Salvation Army, and the second for private cases, among whom there were also women whose financial circumstances limited their ability ‘to pay very much’ towards the costs, particularly during the Great Depression. Consequently, in 1932-34, the institution was not self-supporting, and relied for its up-keep on funds from Salvation Army headquarters, which were raised through its ‘annual nself-denial appeal’

The introduction of the contraceptive pill had a considerable impact in Australia, and consequently the number of un-married women seeking care at Hillcrest decreased. From about 18 births each week in the early 1960s, the number declined to about 10 per week by the early 1970s, and consideration was given to converting the place to general hospital purposes. In the mid-1970s, when there was a shortage of maternity accommodation in Fremantle, a government subsidy was offered to Hillcrest to provide additional maternity beds until additions were completed at Woodside Hospital, East Fremantle.

In 1974, Hillcrest was closed as a maternity hospital.

Information courtesy of the Heritage Council of Western Australia