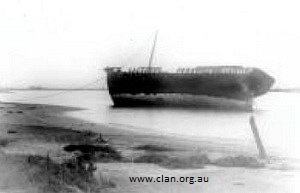 In 1876 the South Australian Government bought the Fitzjames, a Canadian three masted ship.

Unseaworthy, it had been moored in Melbourne’s Hobson’s Bay since 1866. The Government initially used the vessel as a quarantine hulk and then later, at the encouragement of the Destitute Board, had it refitted to serve as a Reformatory ship for ‘uncontrollable’ boys who were wards of the state. Prior to 1880 these boys were accommodated at Ilfracombe, a mansion in Burnside temporarily leased for the purpose.

Once brought to South Australia the Fitzjames was moored in shallow water at Largs Bay. On board the vessel, boys underwent ‘nautical’ training as well as regular schooling. They were under the control of a Superintendent. Boys made their own clothing and boots under the supervision of a tailor and a shoemaker. Other staff on the vessel included the schoolmaster, a carpenter and a cook. Clergymen from various faiths visited the Hulk every Sunday to conduct services. In 1888 a special arrangement was made for Protestant and Catholic boys to attend churches at Semaphore and Port Adelaide respectively.

Only a small number of boys ‘trained’ on this floating reformatory actually went to sea. The majority were placed out on farms.

During its life as a reformatory the Hulk was under constant repair, leaks being a continual problem.

Conditions on board for the boys were harsh and in May 1891 the boys were moved to a newly renovated Reformatory on the site of the Magill Industrial School.