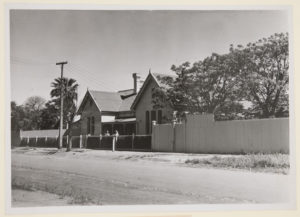 The main role of the industrial school was to provide a reception centre for neglected children who had been made wards of the state.

From 1949  it was known as Glandore Industrial School

In 1898, after girls were moved out of the Reformatory at Edwardstown and relocated to Catholic and Protestant homes in the country, the Magill Industrial School was moved into the vacated Edwardstown site. As Charles Morley in a history of the Glandore Industrial School explains, the institution, despite its name, was not an industry training school. The ‘school’ part of the institution was run by the Education Department and taught the usual curriculum of the day. The main role of the Industrial School was to provide a ‘reception centre’ for neglected children who had been made wards of the state. Children placed there came from varying circumstances. Many had suffered the loss or desertion of one or both parents. Others had been removed from parents due to alleged neglect. Some were physically and/or intellectually handicapped. Others were ill. From the 1930s the institution was also a Remand Home for children who were awaiting appearance before the courts for various crimes and misdemeanours. From the School many children were moved on to other institutions or were placed out into foster care or domestic service. Others were adopted.

Life in the Industrial School during the early part of the twentieth century was difficult. Discipline was strict, food unvaried, activities limited and work hours long and hard. Staff numbers were small to cater for the number of children. From 1926 only boys were housed at Edwardstown, the girls being sent on to the newly developed Seaforth Home. By the 1940s over 140 boys resided at Edwardstown. Conditions at the Industrial School improved over the years and changed markedly in 1943 with the appointment James Francis Slade, the new Superintendent. During his time, 1943-1967, the number of staff increased from nine to over thirty and according to historian Charles Morley, ‘a new level of compassion’ also accompanied the new leadership.

If anyone has  any photos or information relating to this home could you please send it to CLAN.