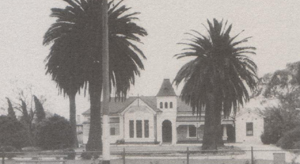 The home was first opened in Quorn in 1927 as an institution for Aboriginal children.

Colebrook Home, named for one of the founders of the United Aborigines Mission [UAM] in South
Australia, first opened in Quorn in 1927 as an institution for Aboriginal children. The first Children’s home run by the UAM had been established three years earlier in Oodnadatta by missionary, Miss Annie Lock. Initially housed in an iron shed, the children were then moved to a small cottage purchased by the UAM in 1926. The following year the twelve children resident in the home were brought to Quorn, along with Matron Ruby Hyde who had been caring for the children since 1925. The children were relocated in order to remove them from the infl uence of their families so that they could be more easily assimilated into white society. As missionary Violet Turner described in her history of Colebrook at Quorn, the UAM believed the children needed to be in a place where ‘they could no longer see the [sic] natives or hear the sounds of corroborree’. It also aspired to raise children in a Christian environment.

For many years Matron Hyde, a graduate of the Melbourne Bible Institute, ran the home with the
assistance of Sister Rutter who had migrated from England. The initial home site was plagued by inadequate water supply, so in 1933 it was moved to another location where the water situation was marginally better. In 1944, after drought caused further severe water restrictions, the Government gave permission for the UAM to establish a home in Adelaide.

That same year the Mission took up a lease on a ten-acre (4 hectares) property at Eden Hills, a
southern suburb of Adelaide. This property included a building which was transformed into children’s dormitories. By 1950 more than fi fty children were resident. Until 1953 they were schooled within the home. After that year they were accepted into the local Blackwood Primary School. In 1952, as a result of a split within the UAM, Sisters Hyde and Rutter left Colebrook to start their own hostel for girls, Tanderra. Colebrook, which had been under stable and constant management for 27 years, was then run by a succession of superintendents. In 1972, because of low numbers, the home and the remaining children moved to a nearby cottage in Blackwood and the building at Eden Hills was demolished. In 1981 Colebrook was offi cially closed. During the fifty-four years of its existence Colebrook was ‘home’ to over 350 children. After the closure a number of former residents came together to form the Colebrook Tji Tji Tjuta. In conjunction with the Blackwood Reconciliation Group, this group secured funding to erect a memorial at the Eden Hills site. It serves as a monument to the many children who went through the home. The fi gure of a weeping mother serves as a testament to the many mothers whose children grew up without them.