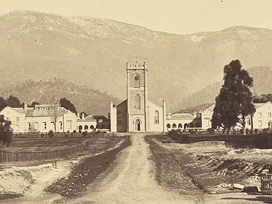 The Orphan School, built by convict labour, operated from 1833 until its closure in 1879.

In 1848, when Charles O’Hara Booth – formerly in charge of the Point Puer boy’s prison – was superintendent, there were 463 children at the institution, of whom 411 were the children of convicts and seven were Aboriginal.

Reports indicate that conditions within the school were harsh: the buildings were sparsely furnished and cold; food was often in short supply; and many of those responsible for caring for the children treated them harshly. Epidemics of scarlet fever in the 1840s, measles in the 1860s, whooping cough and scarletina in the 1870s exacted a heavy toll among the children in the Orphan School. In the 1850s the rights of the children at the school were championed by Edward Swarbreck Hall, a medical practitioner committed to improving public and institutional healthcare.

From 1879 until the 1920s sections of the original Orphan School operated as the New Town Charitable Institution. Women were accommodated in the Infant Orphan School building constructed in 1862, but which had operated since 1874 as a lying-in hospital and home for “mentally defective” girls as well as providing accommodation for destitute women.

The Boy’s Training School had relocated to New Town in 1896 from the Cascades where it had operated since 1869. This school accommodated young criminal offenders between the ages of fourteen and eighteen and idealistically promoted itself as a place for instruction and improvement.

Until 1913, when a dormitory was built, the boys slept in cell-like cubicles and were classified on admission in much the same way as convicts had been earlier in the century. They were expected to work long hours, either in one of the various trade shops associated with the School or at the Government Farm. It was 1918 before a school was established and even then vocational training predominated over more academic endeavours. In 1922 this school was transferred to Deloraine where it is known to this day as the Ashley Boy’s Home.