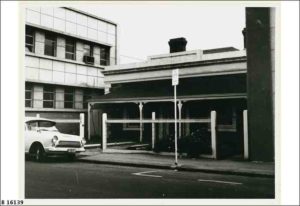 Central depot was a receiving depot for children who wre wards of the state, and stayed at the depot until they were placed into foster care or an institution. From 1923 the depot also acted as a temporary detention centre for children under 18 years of age who were aresed by the police. In 1965 its functons were transferred to Windana remand home.

The Central Depot was fi rst mentioned in Annual Reports of the State Children’s Council in 1903, but according the 1965 report on its closure, operated from 1900. Its primary role was as a receiving depot for children who were wards of the state. Children placed under the care of the Department came first to the depot before being placed out into an institution or into foster care or service. Children returning from any of the above situations also passed through the depot before moving on. Initially a matron and a number of ‘travelling attendants’ made up the staff. The attendants regularly accompanied female state children who were boarded out or were returning from service. In 1917 the Department purchased a cottage in Gawler Place and a vacant property adjoining it. This cottage provided new quarters for the matron and her staff and allowed parts of the original building to be developed into ‘a large number of commodious detention rooms and wards’ complete with extra bathrooms.

From 1923 the Annual Reports of the State Children’s Council note that the Depot also operated as a temporary detention centre for children under 18 years of age who were arrested by the police. They were detained there, in a section of the building separated from the other children, until their appearance before the Children’s Court. Sometimes children who were not state wards were also accommodated at the Depot overnight, pending transfer to another home or elsewhere. A matron and a small number of staff cared for the children. From the 1930s until 1963, the matron also took charge of a number of state girls who were admitted to the depot to be trained in domestic duties. Religious instruction and radio entertainment were the main forms of recreation for inmates. Girls and boys in the Depot were accommodated in separate wards and had their own dining and recreation areas.

The Depot continued to operate at the Gawler Place site until 24 May 1965 when its functions were transferred to the new Windana Remand Home at Glandore.