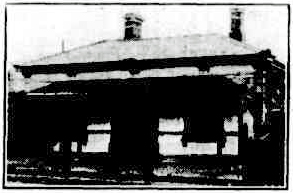 This Home could house 10 girls at any one time and when it was closed in 1943 the girls were transferred to the Convent of the Good Shepherd at Plympton.

This home for Catholic girls was opened in August 1930 in a twelve roomed house already owned by the Catholic Church. It was named after a village in Italy where a miraculous picture of the Virgin Mary, is venerated. No explanation for this name is recorded, but it has been suggested that the name was chosen in the hope that the home would be protected by Mary. The establishment of this new reformatory had been encouraged by the chairman of the Children’s Welfare and Public Relief Department. He wished to relocate the ten Roman Catholic girls detained in the Salvation Army managed Barton Vale Probationary Home for Girls to a separate Catholic reformatory. There they would be able to receive religious training in their own faith. These girls had mostly come from the Redruth Girls Reformatory which had closed in 1922.

The new home at Parkside operated under the direction of the Archbishop of Adelaide and was managed by the Sisters of St Joseph. The first matron was Sister Francis Clare. The home was also under the control of the Children’s Welfare and Public Relief Board which paid a subsidy to the reformatory to cover the complete cost of the care of the girls. In 1930 this sum was £1 per girl per week. During the Second World War the girls received correspondence school lessons and were given instruction in first aid and air raid precautions. This small home could only house 10 girls at one time and was always regarded as temporary. On 21 January 1943 it closed and the girls were transferred to the Convent of the Good Shepherd at Plympton.