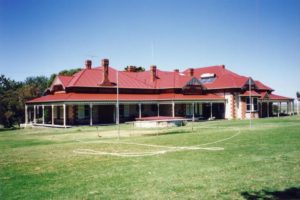 In 1954 the South Australian Government purchased Campbell House homestead and 2517 acres (1019 hectares) of surrounding land from the Commonwealth Government. The land had been acquired by the Commonwealth to be used as part of its War Service Land Settlement scheme.

The State Government immediately made the land available to the Aborigines Protection Board so that it could be developed into a residential home and training farm school for Aboriginal boys. The existing homestead was renovated and additions made. Land was cleared and fenced in preparation for crops, and small herds of sheep and cattle acquired for the farm. The new school was named Campbell House Farm School in order to maintain the original name of the station which had fi rst been established in 1840.

The initial group of fourteen boys moved into the premises in January 1959. They were supervised by three staff – a Superintendent, Matron and Farm Overseer. General cleaning, cooking and other home maintenance was handled by three domestic servants, all of whom were of Aboriginal descent. After completing primary education at the Meningie Primary School inmates were trained in agriculture, grazing, pastoral work and basic farm mechanics. Some boys went on to study at the Meningie Higher Primary School. Captain R Titheradge, resident Salvation Army missionary at Point McLeay, made fortnightly visits to the school to provide religious education and a regular Sunday service for boys and staff. Some of the older boys became playing members of the Meningie Football Club. Most of the boys became members of the Meningie Scout and Cub groups.

The aim of the home was to provide Aboriginal youths with a practical background in farming and
grazing so that they could obtain work in the industry on discharge from the School. As noted in the 1955 Report of the Aborigines Protection Board, this was considered to be the kind of occupation ‘to which they appear to be best suited’. Employed in the farming industry, they would ‘become absorbed to some extent in the general community’.

In February 1963 the Aborigines Protection Board ceased to exist and was replaced by the new Aboriginal Affairs Board. In its fi rst Annual Report, the Board expressed concern about the high cost of maintaining the school and its lack of success in achieving its training objectives. Early in the following fi nancial year the Board ordered the closure of the school. The resident boys were transferred into foster care and the property was sold. The homestead still exists and today is part of a privately owned dairy farm.

If anyone has any photos or information relating to this school could you please send it to CLAN.