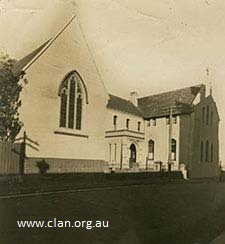 For further information about this Home, please refer to: A Piece of the Story

The Sisters of the Good Samaritan made a foundation at Balmain in 1864 and were engaged in primary and secondary teaching. They also conducted a boarding school for young ladies. In 1910, when the Manly Industrial School and Orphanage closed, permission was sought from Cardinal Moran to use the Balmain Convent for a Domestic Training School for the older orphans from Manly. The younger orphans were transferred to Mater Dei Orphanage at Narellan. The School closed in 1924.

On the vacant block of land next to the Convent the Nuns built Dillion House and that’s where they taught Secretarial Classes. There was a tennis court or netball court that was enclosed in 12ft high wire fencing and then below that was the fenced vacant block on the corner of Vincent St. Children were allowed to go in there sometimes and there was old stairs from the footpath down onto the block. It was always overrun with weeds and farmers’ friends that would stick to children’s socks.

It later became the Aboriginal Training and Cultural Institute was established by Margaret Valadian and Natascha McNamara to promote skills in areas such as Aboriginal management, leadership, youth work and adult education. Its literature was used by Aboriginal groups around Australia. It was in existence from 1978 to 1990.

If you are a CLAN member, click here to login to view the Homes Gallery