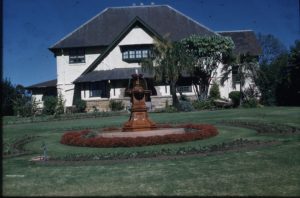 Fred Heine, a descendant, recalled in the 1930s the house had 3 staff – a cook, butler and gardener – two of whom lived in the rooms near the current pool – now joined into a single roomed flat. Fred recalled the first owner had told his family the unique terracotta fountain was purchased at the Paris Exhibition of 1913, and the base was made locally in Enfield.  The fountain was planted around with lavender.

In 1952, the property was bought by the Department Of Community Services and renamed “Winbin”, which in the local Aboriginal dialect, means “Children’s Home”.  In 1955, Winbin provided supplementary accommodation for Montrose and Corelli and it had operated as a home for preschool-aged children.

The previous owners of No. 12 Victoria Street, the McKenzies, recall children moving in lines, two by two, dressed in pinafores. The Department expanded the west wing, to create a dormitory for 20, now converted into smaller bedrooms.

In 1975 Winbin operated as a hostel for wards of the state who were of working-age as well as some who were pregnant.  The goal of the hostel was to assist the girls in making the transition from residential care to independent living.

In 1987, a $600,000 renovation resulted in a new roof, copper guttering, modernization of the bathrooms and kitchen (with a walk-in coolroom) and the rear kindergarten was converted into a 3 bedroom manager’s cottage, occupied until the early 1990s by the Reverend Lomas.