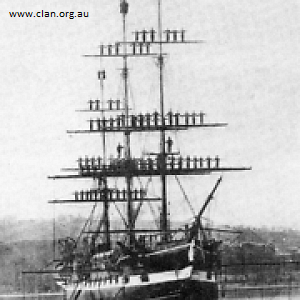 he Vernon was purchased in January 1867. It was refitted and declared a Public Industrial School in May 1867. The ship was the embodiment of the principles of the Society for the Relief of Destitute Children. In 1853 the Society had stated its aims: to provide relief for children found in a degraded and neglected state, to place them in protection under good influences, and to train them in the habits of honest industry.

The Vernon was initially moored between the Government Domain and Garden Island. Admissions commenced on 20 May 1867 and by July the following year, 113 boys had been admitted, with some as young as three being sent to the ship. On board, the boys were given moral training, nautical and industrial training and instruction, and elementary schooling.

On board the “Vernon”, boys received a combination of moral training, nautical and industrial training and instruction, and elementary schooling. The curriculum was well-defined.

In 1871 the Vernon was moved and moored off Cockatoo Island. The island provided a small plot for the boys to have a vegetable patch and for use as a drill ground and recreational area.

The Sobraon succeeded the Vernon in 1892.

The commander of the Vernon and Sobraon ships was Frederick Neitenstein (1850–1921), introduced a system of “discipline, surveillance, physical drill and a system of grading and marks. He aimed at creating a ‘moral earthquake’ in each new boy. Every new admission was placed in the lowest grade and, through hard work and obedience, gradually won a restricted number of privileges

Information courtesy to the Dictionary of Sydney