In 1929 Derrick accepted a voluntary position as assistant-commissioner for leader training in the scouts; he was to hold the post for twenty years. Tally Ho, a farm at Burwood for homeless and delinquent boys founded by the Central Methodist Mission in 1903, had been going through turbulent times since the death of its founder Rev. George Cole in 1919. In July 1930 Derrick informed the mission’s executive-committee of his interest in the institution; with Rev. Irving Benson’s support, he was installed as superintendent that month.

In his twenty-seven years at Tally Ho, Derrick earned a reputation as an innovator. He believed that a bad boy was made, not born. Hence reformation was possible ‘by removal from his old environment, the formation of new and more wholesome friendships . . . and the development of an ambition to succeed’. Using the ideas of Homer Lane, an American, Derrick created a society in miniature, with its own courts and parliament constituted by the boys, all of whom had jobs for which they were paid; the money was used to buy food and clothing, to pay for entertainment and to meet fines imposed by the courts for misdemeanours. Good behaviour was rewarded with stars which could be redeemed for extra privileges. While the system was not without its faults, it was a revolutionary change in an institution where corporal punishment had been the norm.

On 31 March 1934 at Wesley Church, Melbourne, Derrick married Hazel May Dalton, a fellow staff member who then took on the role of matron. During their tenure the institution expanded to include a training farm, Woodlands, at Lilydale. Never content with the traditional model, Derrick was an early advocate of both campus and scattered cottages, co-education in juvenile institutions, as well as secondary education and city-based hostels for boys unsuited to farm work. After World War II he was able to bring some of these ideas to fruition in the reconstruction of Tally Ho on the cottage system which allowed a more family-like atmosphere and greater recognition of individual needs.

Through his membership of a range of child-welfare organizations, Derrick helped to change the way in which the state cared for its wards. He was particularly influential in the establishment of training courses for child-care workers. A member of the committees of the Child Welfare Advisory Council, the National Fitness Council and the Victorian Council of Social Service (president 1954-56), he was vice-chairman of the Australian Social Welfare Council and chairman of the Youth Council of Victoria. In 1958 he was appointed M.B.E.

MOST people throughout the Kooweerup, Lang Lang, Bayles and Catani districts will have met or heard of James Paton Brown, Jimmy Brown as he was affectionately known.

He was one of those good guys about the place who could be relied on to help.

He was a good worker, good sportsman and good family man.

Eulogists reflected these qualities when he was farewelled at the Lang Lang Anglican Church on Tuesday 20 May.

He lived his early life at the Methodists Babies Home and later moved to the Tally Ho Boys Home.

He became part of the Johns family at Agnes Street, Mont Albert, when he went on weekend visits to their home and later the Edgar family when Ruth Johns and Jack Edgar were married.

Their son, Wal Edgar, said in his eulogy to Jim that although he came to love his grandmother, “Ma Johns”, and enjoyed the family life things weren’t so easy back at Tally Ho for a seven-year-old boy.

“Life at Tally Ho was another story and he learnt survival skills in a tough world as he grew up,” he said.

He became a free spirit, and whether because of the Johns and Edgar families, the strict discipline at the boys’ home or his inherent self, he became one of the finer men in the district.

Mr Edgar said the orchardist opposite Tally Ho allowed the boys to pick apples from the first four rows of trees.

“Jimmy would take a pillow case and fill it with apples to share with his mates,” he said.

“A panel of senior boys applied discipline at the home and they were judge and jury, but Jimmy reckoned they picked on him.

“When a senior boy from the panel was on a flying fox, Jimmy lowered the down hill end of the rope and the boy ended up in the prickle bush.

“This made matters worse.

“On another occasion Mum bought Jimmy a new Sunday suit. Within a week it disappeared from his room.

“Young Jimmy took the housemaster head on and retrieved the suit from his son.

“Because of his free spirit he was removed from Tally Ho and taken to Turana at Lilydale.

His arrival gift was a high-speed boot to the rear end, compliments of the superintendent.

“His first job was to round up nine horses in a paddock and tether them to the fence.

“The 13-year-old was bringing in the last horse when his sore backside gave his brain a flash of inspiration.

“He untied eight horses, letthem go, and rode off on the one he held.

“He rode until dusk when he was at Ferntree Gully, released the horse, and asked around for work, but spent the first freezing night among the gravestones of the cemetery,” Mr Edgar said.

He soon built a reputation as a good reliable worker and that stayed with him forever.

When the Nicholas family bought a larger property near Albury Jim decided to come south to Bayles.

The story goes that he met Alan Light and Alan thought he’d found a new mate but, besides having a football, Alan had a sister, Nancy.

Jimmy worked for leading transport operators Ray and Jesse Fechner and became well known throughout the district for his reliability.

He was a good sportsman and handy back pocket player at Catani.

He worked for the Bayles Milk Factory, and the Warragul Bus Lines, driving the school bus.

He and Nancy Light were married in 1955 and lived at Bayles and later moved to Station Street, Lang Lang, where they bought two blocks, one on which to build their home and the other to develop Jim’s noted vegetable garden.

They grew and showed orchids and Jim became involved in the Lang Lang Agricultural and Horticultural Show Society.

They also maintained the Lang Lang Cemetery for many years.

Brother-in-law Alan said Jim Brown’s family could be justifiably proud of him and his many achievements.

“Jim was so grateful of Nancy’s support over more than 50 years of married life,” he said. 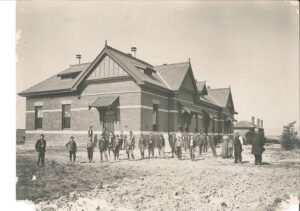 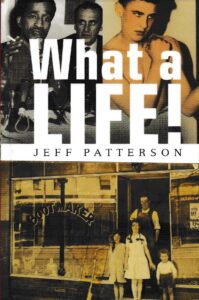 VIC 156
Left on a doorstep the day he was born, Jeff Paterson started life with a poor family in Melbourne’s depression weary inner suburbs. But who would have thought that when Jeff took off to Europe to escape creditors he would become one of Europe’s top entertainment agents living the high life from Monaco to Paris to London.