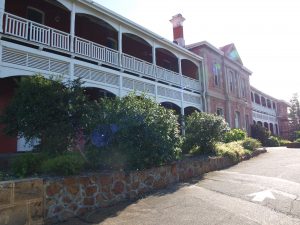 For further information about this Home, please refer to: For the Record

Orphanages During the 1840’s a mission school and native and half-caste mission were established.

In June 1868, the Perth Orphanage was established by the Anglican Church in Adelaide Terrace East Perth. Initially both boys and girls were accommodated in two cottages. The orphanage grew, and in 1876 the boys were transferred to a site on the Swan River in Middle Swan adjacent to St Mary’s Anglican Church, which then became known as the Swan Boys’ Orphanage. The girls remained in East Perth, and in 1882 moved into new buildings which became known as Perth Girls’ Orphanage

Records for both the Perth and Swan Orphanages show that by 1900, one hundred and twenty-two boys were accommodated at Swan Boys’ and one hundred and six girls at Perth Girls’.

A holiday house was purchased by the Orphanage Board in 1931 at Coogee, the old de-licensed Coogee Hotel, located on the Fremantle road and close to the beach. The house served as a holiday house for both the Boys’ and the Girls’ Orphanages, set in 4 acres of land, until its closure and disposal by sale in 1962.

The idea to close Perth Girls’ Orphanage and to create a new Home for girls at Middle Swan in close proximity to Swan Boys’ Orphanage had been under consideration since 1876 when the boys were first moved to the Swan. In 1942, in response to the deteriorated and outmoded condition of Perth Girls’ Orphanage, and Bishop Riley’s concern for the girls during World War Two following the fall of Singapore and the bombing of Darwin by the Japanese, the girls from East Perth were transferred to Swan Boys’ Orphanage for an indefinite period. As a consequence of the amalgamation of the two Orphanages, the institution was restyled Swan Homes in recognition of the new status of care to house children in ‘Homes’ rather than the former orphanage dormitory system. The amalgamation was formally completed as ‘Swan Homes’ in 1943, officially titled ‘The Anglican Homes for Children’.

By 1953 Swan Homes was catering for two hundred and eleven children: one hundred and forty-two boys and sixty-nine girls. All came to Middle Swan under direction from the Children’s Court, were child migrants from England, or were periodically placed by families.

Swan Homes participated in British child migration from 1947 to 1960, with more than 600 child migrants residing at Swan Homes during that period.

As the number of orphaned and migrant children being enrolled declined, the idea was promulgated for Swan Homes to consider boarding farmers’ children to enable them to attend high schools in the metropolitan region. The idea took hold and in the middle of 1959 the proposal became a reality.

‘Swanleigh’ was the name adopted for the place, replacing the earlier concepts of ‘orphanages’, ‘institutions’ and ‘homes’.