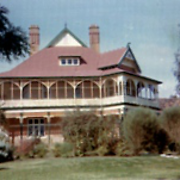 For further information about this Home, please refer to: For the Record

Situated just over three kilometers along the Echuca road from Bendigo stands the great red brick turn-of-the century mansion that was built in 1904. The spacious two storeyed building was built originally as the residence of the first Anglican Bishop of Bendigo. The first two Bishops Langley of Bendigo lived here, but when Bishop Baker came to the Diocese in 1920 he moved to the present Bishopscourt in Forest Street, which had been given by the Lansell family Langley Hall, as old Bishopscourt was later called, was subsequently used as a Red Cross Hostel, and then as a Theologolical Training College.

In 1931, Mrs Wolstenholme, the wife of the Rector of St Peter’s, Eaglehawk had the idea to use the building as a home for single girls and their babies. With the help of her daughter, a trained nurse, and the support of the community, the large old building was re-furnished with rows of cots, food and blankets for the care of these girls and their babies.

Unfortunately, because of certain Governmental regulations it was found that the home was unable to function as such because the Charities Board had decreed that no isolated homes could be started.

The official opening of St Luke’s Toddlers Home took place on Saturday 4th June, 1932 in the presence of a thousand people, including civic, government and church leaders.

Frances Allen was the first kindergarten teacher appointed to St Luke’s, and she recalls caring for a group of twenty five toddlers, mostly boys. “These children were mostly mine for nearly all of their waking hours, from 6.30am to 6pm. There was time off for meals, two hours rest period, one day off a week and one annual holiday. As well as being responsible for all the kindergarten work of the home, and later the ten nurses were also under my care, which meant detailing duties and writing daily lists of work schedules. I also gave simple talks on kindergarten work”.

During these early years the young child care staff worked long hours, and with their board and lodging received a small wage by today’s standards. They would start work around 6am and finish after the evening meal. These young girls enjoyed caring for little children. Many came straight to St Luke’s from the classroom – some came from the country and suffered the pangs of homesickness. The girls had no training, apart from the direction of the Matron and senior staff on the care of ‘toddlers’. The nurses donned uniform and cap, which they wore taking the children shopping and on outings. People being aware that the children were from St Luke’s pressed money into the children’s hands. In later years staff worked on a roster system of eight hours a day similar to that of a hospital shift.

In 1937 the new brick building to be used as staff quarters was opened.

The average number of children in the home at any time was fifty, who were divided into three groups. The youngest from eighteen months to two and a half years were called Gumnuts, at two and a half the child became a Brownie and at four years became a Pixie. The children in each group were all dressed alike – Pixies wore blue, Brownies were dressed in yellow (boys wore yellow ties) and the Gumnuts, if girls, were dressed in pink, while the little boys wore coloured shepherd suits. The children usually spent twelve months at school at White Hills before being moved to another children’s home away from Bendigo.

In 1979 the toddlers home closed as care of children was moved to family based foster care. In the years since, Langley Hall has been a restaurant and reception centre, an antique dealers, and since 2000 has been Bed and Breakfast Accommodation.