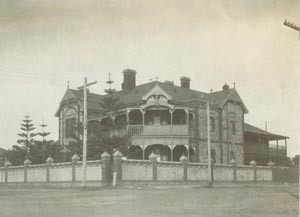 For further information about this Home, please refer to: A Piece of the Story

After a while children were transferred to Falesian College, Brookln Park, SA at 1 Lippsett Terrace

In 1980 the Home was closed and the land was handed back to Aboriginals and was later sold.

The Orphanage was established in 1903 in an eight roomed house under the management and care of the Catholic order of the Sisters of St Joseph. The original purpose of the institution was to provide “A sanatorium for women of moderate means who are ailing and require a stay at the seaside, and as a shelter for children who have no home of their own.” The quotation is from correspondence dated October 10th, 1906.

In 1906 Mrs. Harrold’s two-storey house facing the sea a little north of the Pier Hotel was purchased. Spacious grounds with almost an acre of land, all well laid out with gardens, summer houses, and shelters were included. In the first week of October 1906 the Sisters with Sister Edith in charge, moved their sanatorium into the new premises which, from that date, became known as St. Joseph’s Orphanage Largs Bay. The sanatorium side of the operation was being phased out at this time and finally ceased in 1907. In 1910 sixty Ax children were under the care of the sisters.

Over the years extensions were added and improvements were constantly being made. Following a major extension in 1917 there were 120 children in the home.

However, important as the buildings and improvements were, without the devotion of the Sisters, who gave themselves totally in loving service to children in their care, and showed the interest and affection so necessary for the development of a child, they would count as nothing.

Society owes a great deal to the Sisters of the Order of St. Joseph.
For a number of years changes in thinking on the approach to child care had resulted in reduced admissions to institutions such as St. Joseph’s, and in August 1980 a de6sion was made to close down the orphanage at the end of the year, a necessary decision but heard with sadness by many who had spent their early days there or who had some association with its operation.

Of interest to Largs Bay residents living on the seafront are the comments in 1911 of the Most Rev. John O’Reilly, Archbishop of Adelaide, in relation to St. Joseph’s.

“The situation is an admirable one, it fronts the esplanade and is within a few paces of the sea. The fresh breezes from the deep, and the facilities for bathing are of course conducive to health. The rate of sickness is accordingly low”

Additional images are available for CLAN members to view for this Home.

For CLAN members, the Gallery will be online soon.