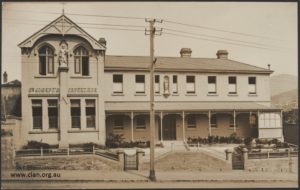 The children are educated and trained to domestic service, needlework, laundry work, etc. Supported by voluntary contributions and aid from Government.
Opened in 1879 by the Catholic Church in Hobart. The building in Harrington St, now Commonwealth offices, was set up for the care of Catholic girls by the Sisters of Charity in 1873.

For babies and young children who were either orphaned or unable to be cared for by a parent, the Boarded Out System was introduced. Government money was paid to foster parents who were tightly controlled by the Social Welfare Department. Most of these children were eventually sent to Industrial Schools to learn a trade and earn a living. The foster parents were chosen from the working class of society who were deemed needy of the money; in some cases, they were related to the children. For families where there wasn’t an income and who were deemed worthy of charity, the Social Welfare Department would be given what was known as Outdoor Relief. The amount of money given was determined by the number of children in each family under the age of 12. Children over the age of 12 were expected to be apprenticed or in the work force with wages given to their families.

In 1969, the orphanage closed and the remaining residents were transferred to cottages at the Taroona Child Care Centre, which closed in 1999.

For further information about this Home, please refer to:  A Piece of the Story.