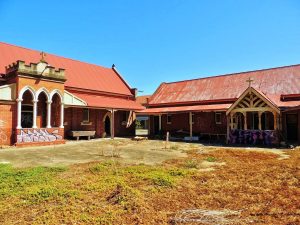 For further information about this Home, please refer to:  A Piece of the Story.

Father John Healy of the Thebarton parish founded this reformatory home in 1898 to provide alternative accommodation for Catholic boys committed to the government reformatory at Magill. It was run by a new order, the Brothers of St John the Baptist, established by Healy in 1892 and made official in 1922.

Although numbers of residents were consistent in the early years, by 1941 there were only 4-5 boys in the reformatory. That year too the home ceased to operate as a registered government reformatory and was no longer under the control of the Children’s Welfare and Public Relief Board. The reformatory was renamed St John’s Boys Town and as part of a rationalisation of the prevailing situation in Adelaide, it was decided that the Brothers of St John the Baptist would look after older boys.

By 1942 the number of boys in care had risen to almost fifty. Internal problems within the order, combined with some behaviour management issues within the home, led to the handing over of control by command of the Archbishop. The Salesians of Don Bosco replaced the Brothers of St John the Baptist.

The order of the Brothers of St John the Baptist was suppressed and ceased to operate. Several options were offered to the remaining brothers, which included transfer to another religious congregation. On taking over, the Salesian priests and brothers applied to alter the name and rules of the home to put a new focus on education and training. Around 1953-1954 full authority to accept day-boys for both technical and secondary studies was granted and the name ‘Boys Town’ was discontinued. A new building was erected so that the number of residents could be increased. The Salesians were particular about the boys they would accommodate, preferring to take boys over the age of ten with at least grade five standard education. The home became known as ‘the boarding section of Salesian School’ and in the mid 1960s the school was referred to as the ‘Salesian College’. St Johns Boys Home closed at the end of 1984. Salesian College finished as a co-educational secondary school at the end of 1996.