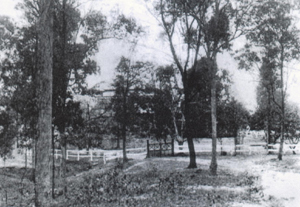 Rhyndarra, on a reduced site of approximately 12 acres, was transferred to William Booth, founder of the Salvation Army, in 1907.

Booth had established the Salvation Army in England in the mid 1860s as a church with a strong social conscience, campaigning against poverty and the sins of alcoholism and other moral failings. A large part of the work of the church was in establishing homes for people who were destitute, aged, unmarried mothers, orphans and others in need or in peril.
Old Stables, part of the residence, Rhynadarra, ca. 1931. The building was used as a schoolroom for the Salvation Army Home

The Girls’ Industrial School at Yeronga was one of a number of similar institutions conducted by the Salvation Army in Queensland at this time, including maternity hospitals, receiving some financial assistance from the government for the orphanages. These institutions were periodically visited by public servants who monitored the welfare of the children.

The girls who lived at Rhyndarra were trained for domestic service and situations were found for them when they were old enough to leave the orphanage. In 1910 the matron noted that “each girl is taught housework in all its branches, gradually passing through the different stages from dormitories to dining room, laundry to kitchen and pantry.” The house was adapted to accommodate the number of girls resident in the institution. The folding doors dividing the drawing and dining rooms were removed to form the main dormitory and the sitting room was used as a dining room. Upstairs rooms were used to accommodate the girls and the staff, including a matron, cooks and a teacher. The stable was converted for use a schoolroom, where the younger girls were taught basic lessons. The older girls helped look after the younger girls and could attend state schools in surrounding suburbs or were employed in the workroom where they learnt needlework and other tasks, or helped milk the cows. The home aimed at self-sufficiency, with a kitchen garden and flower garden, pigs, chickens, cows and horses.

Numbers at the orphanage fluctuated with changing circumstances and the institution accommodated girls who were orphaned, whose parents were destitute and could not care for them, who had run away or were difficult. In 1899 there were about 30 girls at the home, ranging from 6 to 16 years of age. In the early 1900s there were only 18 girls resident, but by the 1930s and the economic depression of that period the population increased to between 60 and 70 girls, ranging from babies to teenagers. 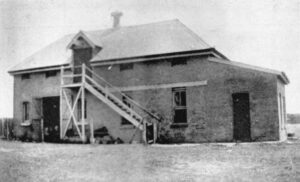 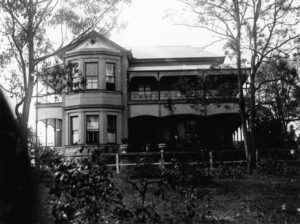 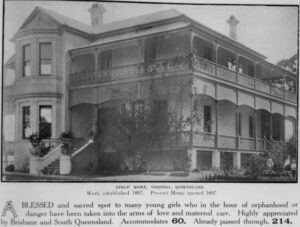