Our Lady Of Sion

Our Lady Of Sion 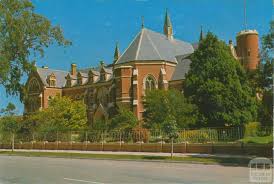 Extract from Sisters of Our Lady of Sion Centenary 1890-1990

Warragul’s first boarder Viva Mathieson was admitted on the 17th February and baptised in the Warragul Chapel by Father Roche on 25th August, 1905. Nell Denehy, sister of Sister Guiseppe was her god-mother

As with every Sionian foundation, the poor and under-privileged were not forgotten. Thus it was that the block of land in York Street opposite the Convent building was purchased, and the orphanage begun in 1913. So were trained and educated many girls over the years to become good citizens and establish solid Catholic families. They were taught and cared for by Mothers Evangelist, Brida, Xaverius and her sister Miss Emily Huthnance, a retired state school teacher who was a lady boarder living in a building on the same block as the original orphanage. Marry priests availed themselves of the Lc dkred and ambbumd k the tçIq, of the children, whose wefte was dose to their hearts. Marry of these children, whose parents had fallen on hard times, were enrolled in the boarding school for a more complete education.

Later on, the orphanage was situated in the Convent grounds proper, at the Codrington end of the block, and later still in a modern building constructed new the well- known kiosk, later to be used as a Novitiate building for a time. The building still exists as self contained flats. In 1947 the orphanage finally closed, when the remaining few children were sent to St. Catherine’s Orphanage in Geelong.

In 1927 the Bairnsdale Convent was dosed and Ascot Vale opened where a large primary school awaited the services of the Sisters. The following year in 1928, the Convent at Box Hill was founded. The secondary school began with fifteen students, while the Sisters took over the already established primary school.

From 1928 then the Sion Sisters entered on an era of primary school teaching at Ascot Vale and Box Hill; whilst running three secondary schools at Sale, Warragul and Box Hill.

All denominations were admitted to these secondary schools. French was taught right through; also in earlier times Latin, Greek and German; as well as Maths and Sciences, music (class and private. It was possible to learn violin, organ, singing as well as piano), typing, shorthand and book keeping; painting in water colours, oils, charcoal and pastel, dressmaking, plain needlework and embroidery.

‘Discipline” was on French lines. Each class had distinctive colour “decorations” wom by each child in class each day: a waist belt and a pearl cross attached to a band around the neck. Rewards for good work and conduct were dispensed at monthly assembly (which was often also a mini-concert, providing audience experience for budding pianists, elecutionists and others) – A “double badge” or broad band of the class colour worn from shoulder to dress bern if both diligence and behaviour were superior, a “single” or narrower badge for one or the other. Then too the monthly prefects badges were allotted to those seniors who had shown themselves responsible.

Prize Day each year was also a first class concert chonises, Art of Speech, Drills and marching, piano other items.

In 1958 Sisters Francis (Superior), Ellen Allman School Principal), Dorotheus, Lairaine, Eucharista and bernadina went to live in the little Convent built in 1927 by Bishop Ryan. Classes were large, including many children from the R.A.A.F. Base, East Sale. Student teachers were trained on the job in early years, receiving primary registration after two years of instruction and supervised classes within the school. The Sisters taught Music to private pupils, and gave Musical Appreciation classes at St. Pats.

Two Sisters gave weekly half hour classes after Sunday Mass at Rosedale to prepare children for the Sacraments. In later years children were bussed into Sale instead for instruction by lay catechists.

During 1960 M. Austina and Sisters Edwardine and Harold lived at Stratford under direction of the York Street Convent taking chaise of the primary school there. This arrangement was cut short by the sudden death of M. Austina (18th August).

In 1961 Sister Edwardine transferred to Warragul, and M. Stanislaus with some novices, travelled to Stratford daily. Sister Sylvester continued this from 1963-66, after which Sister Rosalie took over. Sister Dorothy Renton and others were also involved. In 1968 Sister Lauraine began travelling out by car, and continues to do so still. Over the years class numbers have increased greatly, and several classrooms were added in 1988. An extension of the Sisters’ work in this district has been to hold Sunday after Mass classes at Briagalong for children preparing for Holy Communion and Confirmation.

THE BISHOPS OF SALE

Bishop Corbett died on 29th May, 1912. The Sionian Letter pays this tribute to him. ‘We have lost the most faithful friend of Sion in this distant land to which he had himself brought our Sisters 33 years ago. He liked to relate how he owed to the dear souls in Purgatory the success of his request to Mere Marie Paul, from whom he had received an absolute refusal for the foundation. Immediately after Mass next day, which he had offered for the Holy Souls, he returned to Sion, convinced of his success, and without difficulty obtained his request for a small group of Sisters to go to Australia.”
The second Bishop of Sale, the Most Reverend Patrick Phelan, was consecrated on the 2nd March 1913. Towards the end of 1924, he went to Ireland and visited Lours, but died on 5th January, 1925 soon after his return to Dublin. The Sionian Letter expresses its appreciation for the work he did during the twelve years of his episcopate. It continues: “For Sion he had a great admiration and esteem, showing himself on all occasions a true friend.”

An extract from Rev. P Curran from the chapter The Sionan (1924):

During the past few months I have been asked more than once to write something for the first number of the Annual about to be published by the children of the Convent of Notre Dame de Sion, Sale.

My first duty is to congratulate the present children in undertaking the good work. It is long overdue. It shows the praiseworthy pride they take in their Alma Mater. It will refresh in the minds of ex-pupils the high standard of conduct set before them by word and example in their school days; it will make more widely known through the state an institution that has been doing admirable work in Gippsland for the last thirty years.

Those ladies who are now in the Convent and have finished their education in the place will be able to write, for the benefit of others, the advantages of spending some years under the direction of the Sisters of the Sion. It is to be hoped they will make clear the evident fact that some parents do scant justice to themselves, their children, and the Convent by leaving their girls for one year only at the School. Secular knowledge could be gained elsewhere if that were the only end in view. Fathers and mothers seek something high for their children by the fact that they send them to the Convent. Their intention is to develop the best qualities of the child, to bring out the hidden treasures of the mind, to form the character, to fit up the child to face the battle of life in order to come out with honour from the conflict.

To accomplish work of that kind requires time, and though that may entail expense, it is certainly the wisest outlay a parent can ever make for a child.

Some of the fine statues one often admires had many corners knocked off before the marble brought to that state of perfection. In like manner there are children who could improve wonderfully if parents would make a little sacrifice in sending them for a few years to those homes of virtue, where the way of duty would be pointed out to them, where their eyes would be opened to the dignity which is theirs.

The greatest gift the world has ever received came through a spotless maiden. In every generation, good girls are a source of great blessings. Religion in the home, and even in the district, is often due to them in a large measure. Their influence for good is always in proportion to their perfection.

When the disciples of John the Baptist went to inquire from Christ if He were the promised Messias, they were told to see the work that was being then done. Those were the real signs of Christ’s mission. The greatest of the wonders was kept by Our Lord for the final proof of His divinity: “The Gospel is preached to the poor.” That work will continue as long as the world lasts to point out who are following in the footsteps of Christ.

A home is provided in Sale by the convent for poor children. They are taught there all that can make for their moral and material welfare. In carrying out that work of charity the Sisters deserve the generous help of the people of Gippsland.

“The Lord is the portion of my inheritance.”

Several hundred years before Christ came in His human form His work and mission were pointed by divinely inspired prophets. He possessed all the treasures of wisdom. He did not seek for Himself the perishable goods of time. His mission consisted in taking the Lord as the portion of His inheritance and in giving this all wise example to since favoured souls who are called to imitate Him.
How happy parents should be when one of their children is called by God to continue the work of His only begotten Son! Instead of preventing children from following the vocation given them by God, they should give them every encouragement, and consider themselves highly honoured to give a member of their family to God and his cause.

I am happy to know that several parents from this parish are sending their children to the Convent at the present time. I feel confident that we will reap rich advantages when those girls come home after finished their education.

In conclusion, I hope the Annual will make the Convent more known and that the articles written by the children will be a lasting honour to them and their teachers.