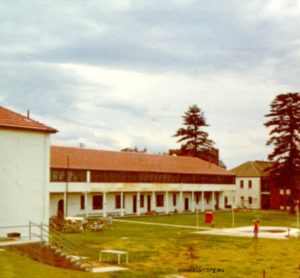 Watt Street, on the Government Domain

The following information is courtesy to NSW State Records:

The Reformatory Schools Act of 1866- was assented to on 12 September, 1866 and came into operation on 15 January, 1869. Under the Act, any child under sixteen convicted of a criminal offence and sentenced to fourteen or more days imprisonment could be sent to a reformatory for one to five years instead of or in addition to the time spent in gaol. There were to be separate reformatories for girls and boys and if possible the parent/s were to pay for the child’s maintenance whilst in the reformatory.

Between 1869 and 1880 the Reformatory shared the same sites as the Industrial School for Females – firstly in Newcastle and then on Cockatoo Island.

On 19 January, 1869 the North Wing and grounds attached to the Public Industrial School for Girls at Newcastle was proclaimed a Reformatory School for Females. On 5 February, 1869 Mrs Agnes King was appointed Matron and Mr J. H. Clarke Superintendent.

On 20 July 1871 the site at Newcastle ceased to be a Reformatory, and a Reformatory School for Females was proclaimed on Cockatoo Island known as the Biloela Reformatory and Industrial School

On 5 February 1880 the premises on Cockatoo Island ceased to be a Reformatory School and the Shaftesbury Reformatory for Females at Watson’s Bay was proclaimed. The cottage style premises were intended to house forty to fifty girls. Girls were sentenced to the reformatory for periods of one to five years.

The numbers actually housed here were small often numbering fewer than 20. 13 girls were in residence in 1900 when the State Children Relief Board took control of Shaftesbury. The Board then placed 25 female State wards (either invalids or girls who were unsuitable to apprentice as domestic servants) into the home in addition to the girls under sentence.

The Shaftesbury closed in March 1904 and the girls were boarded-out. On 12 April 1904 the Shaftesbury ceased to be a reformatory school and a portion of the Central Depot for the State children at “Ormond House”, Paddington was proclaimed a Reformatory School for Females. The girls under sentence were transferred to Ormond House in 1905.

The above information is courtesy to NSW State Records.