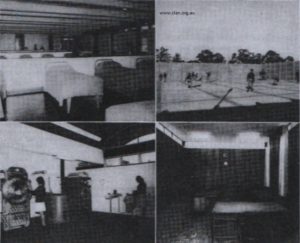 The Minda Remand Centre was opened in Lidcombe in May 1966, by the Child Welfare Department. It was a shelter and remand centre for children appearing before the children’s courts. Minda comprised a court and separate residential sections and schools for boys and girls aged between eight and 18, who stayed on average four weeks. In 1976, when Taldree opened, Minda became a facility for boys aged 18 to 20. In 1991 Minda became a Juvenile Justice Centre, under the control of the Department of Juvenile Justice.

For further information about this Home, please refer to: Connecting Kin

Some comments about Minda from a CLAN member:

Minda 1
Girl’s dormitory – we had to fold up the chenille bedspreads before sleeping and place them in the ‘single room’. Mornings the beds were stripped and remade with hospital corners. Throughout the night the officers would walk along and shine a torch onto our faces to check that we were asleep and in our own beds. Girls “bed bashing’ other girls was a problem.
I was always given bed number 3 in bay 1 right in front of the night officer’s office – and I was there many times over three years. The back bay was the place to be because it was darker and you could sleep without waking up to the girls going to the office for toilet permission or the sound of the officer’s keys rattling as they moved around.

Minda 2
Most females ex-inmates would experience a strong emotional response to this picture – the space you see here is the total area the girls spent the days in (apart from school, laundry, showers, feeding and sleeping and a couple of hours in the recreation room) the weekends were mind-numbingly long and boring.
The trampoline, because it was the only thing to do apart form sit on the grass or benches, caused many fights and was used as a punishment by staff (removal of ‘privileges’. This word always made me laugh as the trampoline was the only privilege – no plural!) For me the trampoline is the image that represents everything about that place.

Minda 3
On the left-hand side is the window to the office and also where the nurse would hand out medications. In the corner is the kitchen and dining room, the dormitory is behind the trampoline. Out of view and on the left is the laundry, isolation cells and the walls. Every three days we would be provided with a change of clothes from the laundry – communal clothing including underwear.
It was a regulation that all girls wore a bra, which was carried out to the letter. When I first came in at age eleven I was given a crisp white cotton bra and told to put it on. I was an underweight small sized child with no sign of breast development – which the girls found hysterical when they watched me trying to put the bra on. Later on a few of the older girls made a bit of a protest about applying this rule to me as I looked ridiculous, but the rule held until about a year later I was told I could take it off.

Minda 4
Believed to be the boy’s section

In 1991 the Minda home became a Juvenile Justice Centre.