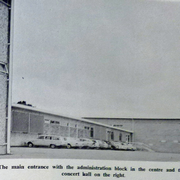 Also known as the South Australian Youth Training Centre from 1979

Ever since the Second World War, stormy argument waxed and waned over the old reformatory and Magill was always the controversial centre of the State Juvenile Reform System.

During the early 1960s plans were underway to demolish the old buildings forming the boys’ reformatory at Magill, and to update the institution.

Finally in November 1967, the new institution at Magill was officially opened and called McNally Training Centre in honour of Mr Frederick John McNally, Chairman of the Children’s Welfare and Public Relief Board from 1946 to 1961.

The Department’s Annual Report 1967-8 mentions an interesting find at the time of the old reformatory was demolished.
“At a ceremony on 21st October 1867, a corner stone of that building was laid formally by the Commissioner of Public Works. When the building was demolished a sealed bottle containing a copy of the Register and Advertiser newspapers of the 21st October 1867 and a scroll on which was an inscription regarding the laying of the corner stone was recovered intact.”

This bottle was re-discovered in the bottom drawer of a filing cabinet in Welfare Information and Publications Branch and has been sent to the Mortlock Library to extract the newspapers and scroll.

Many advancements and improvements for the care and training of children were introduced while Mr McNally was Chairman. Extensive additions were made to Seaforth Home, Struan Farm and Lochiel Park Farm School were opened, hostels and cottages came into use, Vaughan House (girl’s reformatory) replaced the former “Barton Vale” private reformatory, and a new security section for boys was built in the Magill reformatory. Non-institutional care for children was improved and foster care was used extensively. The Department was given responsible for juvenile probation.

Built at an approximate cost of $1,500,000 the new complex accommodated 164 boys in 12 dormitories. Ten of these were open type, housing 16 boys in each, and the other two consisted of individual rooms and cubicles for “honour boys”. Meals were cooked in a central kitchen and served cafeteria style in four dining rooms to which boys were allocated on a house system. The names of the houses were named after the four Superintendents of the old Magill Reformatory, namely Arnold, Button, Mason and Graham.
Although not as hash as in the old reformatory, discipline was still extremely strict. For minor infringements of the rules, boys could be placed “on the line.” This was the removal of all privileges including smoking, weekly lolly issue, and attendance at entertainment within the Centre. A boy “on the line” was made to run around the gymnasium for hour after hour. Those who came up to expectations received the “privilege” of being allowed to scrub the stone floors of the ablution area.

Until 1969, corporal punishment was still a feature of treatment with the Centre. After being brought back from absconding, a boy was changed into Khaki shorts and shite and placed in solitary confinement in a cabin for up to 48 hours. He was then publicly caned by the Superintendent. All the boys in the centre would form a hollow square in the gymnasium and the boy would be led into the centre of the square. The Superintendent then came into the gymnasium and the school was called to attention.

Eight strokes of the cane across the buttocks were administered and the boy was then placed in a solitary confinement cabin for another 24 hours.

He then received a period of up to one month “on the line”.
This was considered as a deterrent to absconding but report of the witnessing of such public punishment indicated that it was a sickening experience.

The boys’ daily routine was as follows:
Rise at 6:15am and led, in pyjamas, from the dormitories to the gymnasium where, after 20 minutes physical training, the boys were showered, 16 at a time, in the ablution area off the gymnasium. They were then dressed in their institutional clothing of grey work trousers, khaki shirts and green cardigans in the winter. After breakfast, boys over the age of 16 years who were not “on the line” were allowed 10 minutes smoking. Work parties were then detailed off and boys worked until lunchtime in the workshops, dairy or at various odd jobs. After lunch the same routine was carried out until 4:30pm when boys returned to the gymnasium and were then sent to tea at 5:00pm. After tea, boys returned to the gymnasium where they spent the whole evening being paraded for bed time between 9:00pm and 10:00pm. Evening activities centred on watching television, playing records or just hanging around the gymnasium. One can imagine the noise and lack of privacy which was experienced by all the boys placed in one area together for hours at a time.

During the days of McNally Training Centre, various parades were held. 150 boys were made to line up and would be instructed to clean their shoes, two or three boys at a time. This process could take up to an hour and the boys were expected to stand quietly in a straight line and await their turn.

On retiring to the dormitories for bed, the boys were lined up outside and marched into the dormitories by the dormitory captain. On arrival they stood at the foot of their beds until given the order to take off the bed covers. This was done and the bed cover was then folded and their held out by the boy, standing at attention at the food of his bed with his Gideon Bible resting on top of the folded bed cover.

The boys used the width of an open bible to measure the amount of sheet which was turned back at the top of the bed. The Gideon Bible Society boasted that the boys at McNally Training Centre opened their Bibles at least once a day.

As in most large institutions, various phrases became accepted. An example of this was “tops” and “crosses”. A boy wishing to go to the toilet was asked whether he wanted “tops” or “crosses”. This harped back to the days of the old reformatory when a boy in the old exercise yard who wanted to go to the toilet would be asked whether he wanted to go to the top of the yard to the W.C. Over a period of time this became “tops” and “crosses “and was commonly used at McNallys until the introduction of the unit system.

With the appointment of Mr Ian Cox as Director-General of Community Welfare, radical changes were introduced. Boys, for the first time, were addressed by the Christian names. The cane was put away and was not used again.

Boys were allowed generous home leave and the accent was on treatment rather than punishment.

The role of staff changed from being purely custodial to providing care and treatment. Many staff were unable to accept the new conditions and either transferred from the Department or resigned. The need for trained staff was recognised, and staff were encouraged to seek training and were given leave of absence to attend lectures.

In 1972 structural alterations were made to the dormitory block to form six living units, each accommodating up to 16 boys. Each unit contained a dormitory, a dining room, a lounge room, a kitchen and activities room. Staffing was greatly increased. Unit were autonomous and a team of up to seven residential care workers, led by a senior residential care worker was appointed to each unit. The workers provide around the clock care in their units and are responsible for programming the boys’ whole day.

In July 1975 with the closure of the Windana Remand Home at Glandore, McNally was divided into two parts, assesment and treatment.

If anyone has any photos or information relating to this Home, could you please send it to CLAN.