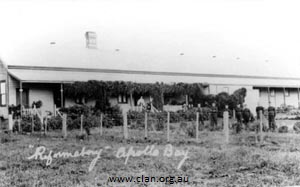 Source – Information supplied by the Social Welfare Dept around 1975.

Opened for business on July 2nd 1905 under the auspices of the Church of England.

It was located on land formerly owned by a Colonel Heath on the banks of the Barham River.

A large substantial building was erected.

The first superintendent appointed was a Mr Maxwell and he had a staff of ‘expert instructors’ to teach the boys farming.

The boys came from another reformatory run by the Church of England at Wandin Yallock which had closed down.  There were about 7 or 8 boys and numbers never got above twenty.

The Reformatory had 4 superintendents in the10 years it lasted, which suggests that it may not have functioned very well even though reports say the staff attitudes to the boys were good and that the boys were taught farming efficiently.

The reports also say that the boys, physique improved with country living and that they had a reasonable amount of recreation, swimming and picnicking.  Absconding seems to have taken place quite frequently and lads who were, placed in farm jobs after their sentences had expired tended to run away. City lads, just did not want to be farm hands even if other people thought it would be good for them. On the other handy staff may have found problems with the boys for the Departmental Reports say that unpromising boys were frequently sent to Apollo Bay.

The establishment closed in October 29th 1915.  Reports don’t say why this decision was taken, the 1915 Report suggests that it was functioning in its usual way in 1914 so there could have been many reasons.

There could have been a scandal or difficulty keeping staff or it may have been too inconvenient for taking boys to and from Melbourne. Or it may be that the organisers felt that they were not getting anywhere with the lads and gave up trying to make city lads into country ones.

By the time Heathfield closed down people were beginning to feel that little private reformatories were becoming outdated in a changing world.