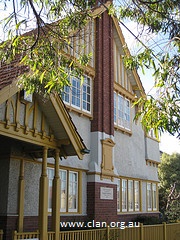 Hartnett House at 117 to 123 Albion Street, Brunswick, was constructed in 1934 to the design of well known Melbourne architects Stephenson and Meldrum.

Named after Sister Elizabeth Hartnett, Hartnett House is both a single and double storey building, constructed mainly of brick and rendered brick, and also timber. Although erected in the 1930s, its Queen Anne design was both unusual and old-fashioned for the time, belonging more to the Federation period of the first decade of the Twentieth Century some twenty years before.

The building is asymmetrical and it has a very prominent gable facing the street. This, together with the dramatically placed tall chimney in the centre of the gable, help to make the design a landmark building. The terracotta roof is mainly gabled but there are also hipped sections, and the rafter ends project under the eaves. The main section of the building is red brick with rough cast render decoration on the upper storey, while part of the building is painted weatherboards. Another feature is the half-timbering treatment of the gables.

Hartnett House was constructed in connection with the Brunswick area operations of the Melbourne City Mission in 1934. In 1888 a brick house with four rooms and stables, owned by a carter Thomas Allum, stood on the site of the building. It was acquired by the Salvation Army Trustees between 1888 and 1889, and was occupied initially by Captain Samuel Roshe and then by Colonel James Barker. By 1890 it was a wood and brick house of 18 rooms, which hints at a speedy building program by the Salvation Army. In 1891 the property also included a shop.

Major James Barker was commissioned in 1892 by General William Booth to take charge of the work of the Salvation Army in the colony of South Australia and adjoining colonies. For reasons unknown Major Barker and his wife arrived in Melbourne instead and rapidly set up a number of corps. George Hall took possession of the property in 1893. By 1899 the house had become a Salvation Army Home and children’s shelter. It appears that a timber building served as the home and that others occupied the brick house.

In Melbourne directories the establishment was referred to as the Rescued Sisters’ Home in 1890, the Neglected Children’s Home (Salvation Army) in 1900, and by 1906 the Melbourne City Mission Home, with Sister E. Hartnett in charge.