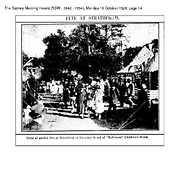 Halloween Children’s Home had regular garden fetes to raise funds in the 1920s, and was supported by local businesses and citizens, including the grocers Messrs Matthews Thompson and Company and Mrs WK Arnott, the wife of the founder of Arnott’s Biscuits, who held bridge parties in her home on Wakeford Road.

A very special Halloween party was held on 31 October 1929 for the children of the Halloween Children’s Home. Photos of the party appeared in the Daily Telegraph of 1 November. Here the children are listening to fairy stories after ducking for apples in a tub. Miss Margaret Tolmie was then matron of the home. In New York the stock market had crashed and the world was plunging into the Great Depression. A garden fete held on 9 November that year was opened by the Premier, Mr Bavin. At that time there were 40 children in the home aged between two and eight. As the Depression continued and families struggled, fundraising was of vital importance to charitable institutions such as Halloween.

In December 1931 a gymkhana was arranged in the grounds of Yaralla to raise funds for Halloween. The event was organised by Mrs E. Greenland and her daughter, Marjorie. Mrs W.E. Arnott was President.

In 1933 the fundraising events included a Flower Show held at Strathfield Town Hall on 18 March. Locals were awarded prizes for the best dahlias and roses, among other categories.

By 1934, there were fewer children in the Home. The worst of the Depression was over and social legislation such as widows’ pension schemes and child endowment meant that more children could stay in their own homes or with relatives. Eventually it became unviable to continue operation and Halloween was closed as a children’s home. During its last 12 months, only 18 children had been in residence there. However, other contemporary sources claimed that Halloween and other children’s homes were suffering from a lack of funds.

The house Halloween was later owned by Strathfield Council and used as the Town Clerk’s residence. It was sold in 1961. 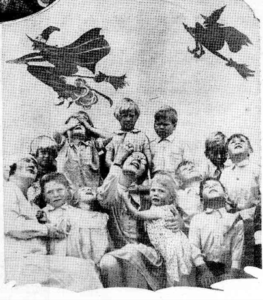 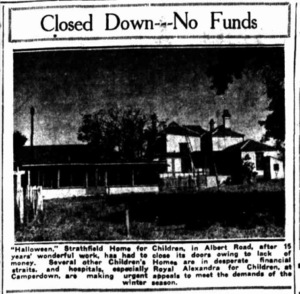 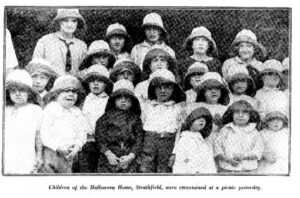 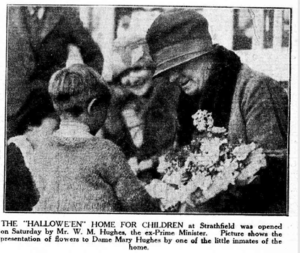