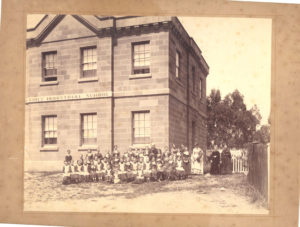 Started in 1864 and taken over by the Salvation Army in 1945.  It had nine different homes in that time, including the Barrack’s Hospital and Administration Building and Kensington House, Davey St (now the Commonwealth Law Court).  From the Minutes of Meetings of the Board of Management held at the University Archives, girls were relatively kindly treated in comparison with conditions in the old Queen’s Orphanage.

For babies and young children who were either orphaned or unable to be cared for by a parent, the Boarded Out System was introduced.  Government money was paid to foster parents who were tightly controlled by the Social Welfare Department.

Most of these children were eventually sent to Industrial Schools to learn a trade and earn a living.  The foster parents were chosen from the working class of society who were deemed needy of the money; in some cases, they were related to the children.  For families where they wasn’t an income and who were deemed worthy of charity, the Social Welfare Department would be given what was known as Outdoor Relief.  The amount of money given was determined by the number of children in each family under the age of 12.  Children over the age of 12 were expected to be apprenticed or in the work force with wages given to their families.

The Girl’s Industrial School merged with the Hobart Girls training School in 1905.  In 1945, the Salvation Army changed the name to Maylands Girls’ Home to provide residential care at a new location.  Closed in 1981, but ran a residential programme for teenage girls until 1998.