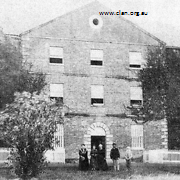 The Female Orphan Institution (also known as the Female Orphan School) was established in 1800 by Governor King to care for orphaned and abandoned children in the colony of NSW. Located in Lieutenant William Kent’s house in George Street, Sydney, the orphanage was supported financially by port duties and the income generated from allocated parcels of land (a secular equivalent of the glebe). When it was officially opened on 17 August, 1801 31 girls aged between the ages of 7 and 14 were in residence. The girls were taught spinning and sewing and some were taught reading and writing. Evidence given by Governor Bligh to the British Select Committee on Transportation in 1812 suggested that there was little emphasis on education, and that the Institution had instead become a clothing factory and a source of domestic servants for colonial households.

In 1813 Governor Macquarie laid the foundation stone for the new Female Orphan Institution, a grand, purpose-built building on the northern bank of the Parramatta River. It was opened to pupils in 1818. The George Street, Sydney site became the Male Orphan School.

By 1829 the female orphanage housed 152 girls from a cross-section of colonial society—including Aboriginal communities—though most girls had convict parents or mothers. Many had one parent living. Girls were accepted from two years of age (lowered from the original age limit of five), they received a basic education and were placed as domestic servants at thirteen.

Supervision of the orphanage was initially the responsibility of a voluntary committee of distinguished individuals appointed by the Governor—magistrates, government officials, clergy and settlers. The first committee was comprised of two Anglican Chaplains, Rev. Samuel Marsden and Rev. Richard Johnson, Mrs King (the Governor’s wife) and Mrs Paterson (wife of the Lieutenant- Governor), the surgeon William Balmain and John Harris, surgeon, magistrate and officer-in-charge of police. In March 1926, the management, care and superintendence of both the Male and Female Orphan Schools became the responsibility of the Clergy and School Lands Corporation. From 1833 the Female and Male Orphan Schools continued under the control of the Colonial Secretary.

A resident Matron (and her husband, the Master) was responsible for the daily management of the orphanage. The first Matron was Mrs John Hosking (1800-1820), followed by Mary Collicott, Susannah Matilda Ward (1821-) and Sarah Sweetman (1823-1824). The Wesleyan missionary William Walker and his wife Cordelia Walker (nee Hassall) took up the positions in 1825, bringing with them a number of girls from the Blacktown Aboriginal settlement, where they had previously worked. They resigned following difficulties with Archdeacon Scott, the official Visitor of colonial schools, and were succeeded in mid-1827 by the Reverend Charles Pleydell Neale Wilton and his wife. Wilton was succeeded in turn by Captain Alexander Martin, RN, and his wife.

On 30 April, 1850 the Male Orphan School, which had been relocated at Liverpool in 1823 was closed. The remaining residents moved to the Female Orphan School site at Parramatta and the two establishments amalgamated to form the Protestant Orphan School.