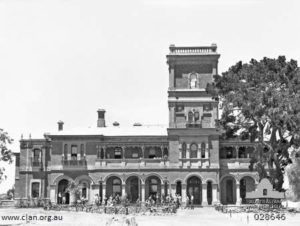 ‘Dhurringle’ started as a mansion built by Melbourne’s most prominent architectural firms at the time as an elaborate homestead for James Winter. When Winter passd in 1885 Dhurringle remained part of the Winter family ownership till 1907 when in 1939 the Commonwealth government rented the property for use as an interment camp for German and Italian aliens. Later in 1941 Dhurringile was taken up by the army for use as a Prisoner of War Camp for Germans captured in the Middle East.

In 1947, Dhurringile was purchased by the Presbyterian Church for use as a home for immigrants boys from the United Kingdom whose fathers had died during the war. The intention was to train the boys in farming methods to prepare them for employment. By this time the homestead was in a deteriorating condition and substantial repairs and alterations were needed. The Dhurringile Rural Training Farm did not open until 13 June 1951. Life in the home was spartan, difficulties were encountered in recruiting boys from Scotland and the scheme had limited success. The Commonwealth Government continued to provide increasing financial support to the home in accordance with an immigration policy to promote British migration, but difficulties persisted and a decision was made in 1964 to close the Dhurringile Rural Training Farm.

In March 1965, Dhurringile was purchased by Victorian Government Penal Department for use in the rehabilitation of alcoholic prisoners. The farm was refenced and the agricultural part of the property rehabilitated to provide a level of self-support. Prisoners provided labour for extensive repair and alteration works at the mansion. Dhurringile remains a minimum security prison, but the house itself accommodates no prisoners and has undergone some restoration and been adapted for use as a training centre.