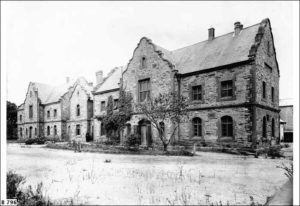 In 1849, with the setting up of the new Destitute Board, the government became more responsible for the care of poor and neglected colonists. A Destitute Asylum was begun, initially in a number of temporary shelters in Emigration Square on Kintore Avenue. The Asylum was the first institution of its kind in Australia. Its role was to provide supervised ‘indoor relief’ for the destitute, including children, pregnant women, the aged, intellectually and physically handicapped people, alcoholics and people suffering from chronic illnesses, such as leprosy. Aboriginal people were also included in the list of categories of people eligible for sheltered relief. They were housed separately from other inmates. In 1851, due to the inadequacy of the temporary huts, inmates were moved to a section of the military barracks near Government House. Over the next few years more buildings of various types were erected to accommodate the increasing number of inmates. By 1856 the Asylum was providing shelter for 65 women, 30 men and 43 children. Living conditions in the Asylum were basic and crowded and the institution was often criticised in the press for being unclean and unhealthy.

In the mid 1850s the children accommodated in the Asylum attended a free school. However, as
numbers of children increased, so did concern about whether the Asylum, with its aged, ill and
sometimes disturbed inmates, was the right place for them. The new Destitute Persons Relief Act 1866-67 introduced two new ways of dealing with children charged as being neglected. They could either be ‘boarded out’- meaning sent into foster care and/or service with ‘respectable’ families – or they could be moved into the yet to be built Industrial School. After the introduction of this new Bill, a large number of children were moved out of the Asylum into temporary accommodation, including the Grace Darling Hotel at Brighton and to Ilfracombe, a mansion in Burnside. The overflow were sent to the St Vincent de Paul Orphanage, run by the Catholic Church, and the Orphan Home, run by the Church of England.

Once the new Magill Industrial School was completed in 1869, 157 children from these temporary
homes were sent there. However, during the period 1870-1881, reformatory girls were still
accommodated within the buildings that made up the Destitute Asylum. They were moved out to Magill in 1881. From that year the Destitute Asylum ceased to be an institution for children. 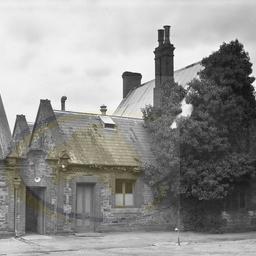