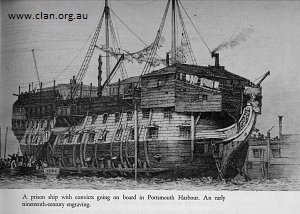 In 1864, with the passage of the Neglected and Criminal Children’s Act, juvenile offenders came under the umbrella of the new Department of Industrial and Reformatory Schools.

The former prison hulk HM Success became known as the Sir Harry Smith and received its first boys from the Deborah. (The Department also had an industrial school situated on a ship, the Nelson.)

However, the ship reformatory was found by the Victorian government to be an unsuccessful model. A Royal Commission on Penal and Prison Discipline reported, ‘a ship is not a fitting place for reformatory purposes if the boys be not expressly designed for a sea-faring life. Experience too clearly proves that immoral practices of the worst kind spring up amongst them, which can never be effectually suppressed’.

It recommended that the reformatory on board the ship be abandoned as soon as an appropriate building for the boys could be found.

The Reformatory for Boys moved to Ballarat in 1879, to a building formerly used as an industrial school for girls. At Ballarat, boys received training in farm, garden and dairy work, shoemaking, carpentry, painting and blacksmithing.

The boys’ labour was much in demand, especially from local farmers. Boys could earn the ‘privilege’ of being released from the reformatory to a placement in a service-home, where the employer was the boy’s ‘guardian’.

The Superintendent’s Report from 1884 describes the system of classification used for boys in the reformatory. The reformatory had three divisions: A (best), B (medium), and C (refractory). Each of these divisions had a senior and junior section, with separate dormitories. As an inducement to behave well, boys were first admitted only to the B or C divisions. Some of the privileges enjoyed by those in A division were the run of the outer paddock, the walk after service on Sundays, the best dormitories, precedence in distribution of library books &c, eligibility to act as monitor, or to have charge of one of the horses, or to go out on licence, &c. I must say that there is no desirable enjoyment that is not within the reach of an ‘A’ boy.

The principal punishment at the reformatory, reported the Superintendent, was the system of ‘fatigue’ where boys were made to labour during play hours. (Isolation [with employment] in a lighted cell) was the punishment for more serious misconduct.

Guillaume reported that the Department kept an ‘After-Career Book’ to keep tabs on former residents of the reformatory and report to the government of the boys’ prospects after release.

In 1890, an editorial in the Age noted that the days of children being held in reformatory schools for periods of five years or more was over. The newspaper claimed that a boy could ‘work his way out’ of Ballarat in nine months, and thereafter only be subject to the ‘unobtrusive supervision’ of the Department.

The government reformatory at Ballarat was closed in 1893. The building then housed a ‘lunatic asylum’.

From the 1890s, juvenile offenders were generally sent to smaller, private reformatories, run by organisations including the Try Society, Salvation Army and Gordon Institute.

Information courtesy of Find and Connect