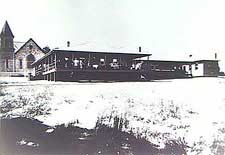 Commonly known as Kennion House, started in 1886 as the Children’s Home, Walkerville

The Reverend George Dove, rector of the Walkerville Parish, led a band of members of the Church of England in the establishment of this home. The group was worried about the fate of Church of England children committed into care under the state welfare system. The home began in 1886 in a rented six room cottage in Smith Street, Walkerville. Funds donated by Mr Robert Barr Smith soon allowed the premises to be purchased. Thirteen children, boys and girls, were the first residents. It was not until 1903 that the management committee decided to restrict the home to boys and by the following year all remaining girls had been transferred out.

While resident in the home, the boys attended St Andrew’s Day School and services in St Andrew’s church. Most boys remained until the age of fourteen when they took up employment. The boys initially lived in very crowded conditions. The situation was improved with extensions and new buildings added in 1894 and 1926, and again after the Second World War. In 1955 the home was informally renamed ‘Kennion House’, after Bishop GW Kennion who had been Bishop of Adelaide at the time the home opened.

In 1976 a number of girls were admitted to the home, primarily sisters of boys already in residence. At the same time the home shifted inmates into cottage style care. Two years later management transferred to the Anglican Child Care Committee. In 1984 the Kennion House property was sold to St Andrews Primary School.