In May 1945 Archbishop Tweedy opened Boy’s Town at Glenorchy. Some priests of the Missionaries of the Sacred Heart rant the home of 27 orphans and needy boys aged between 5 and 16 years. For the first year of its operation. In late 1946, the salesian of Don Bosco Fathers took over the administration of the home and transferred a small number of younger children to the care of the Sisters of St Joseph in Surrey Hills, Victoria.  The Salesians conducted a school on the premises from 1947. In 1951 a new accommodation building was completed on the site. Ten British migrant boys from England arrived in June 1952 and more followed from the British Isles – shipping records from 1952 refer to this institution as “John Bosco Boys Town”. Archbishop Young changed the name to “Savio College” in January 1956. Orphan and migrant boys attended the school and ‘boarded’ on site. The last migrant boy left in July 1959. In 1973 Savio College, Holy Name College, run by the Dominican Sisters, and the Glenorchy Parish Primary School amalgamated to form “Dominic College”. The boarding section section of the college closed in 1994. The only date for this exposure to the new regime was in the way this way the only people to find this will make the transition to the new only to the new week. The Diocesan archives hold few records from the time of Archbishop Tweedie, who was 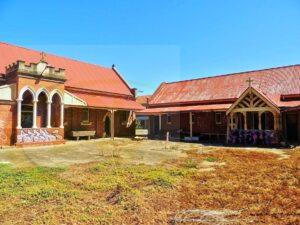