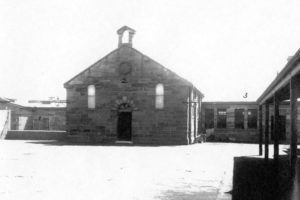 Biloela is an Aboriginal word meaning “black cockatoo”. The Biloela Reformatory School for Females operated on Cockatoo Island in Sydney Habour from July 1871 until February 1880.  It shared the space with the Biloela Public Industrial School for Girls, and residents were a mixture of neglected and orphaned girls as well as girls who had been convicted of crimes.

These institutions were established after a rise in public concern for neglected and sayward childre, following the social disruption of the gold rush years, resulted in an Act for the Relief of Destitute Children, known as the Industrial Schools Act 1866, and the reformatory Scholls Act 1869.  Prior to 1871 girls had been housed at a reformatory in Newcastle, but bad management there and the attraction of the authorities of an isolated spot away from the public gaze led to their removal to Cockatoo Island.

The girls were housed in buldings on the western side of the island that had previously held male convicts.  In the same year – 1871 – a training ship, the Vernon, intended to teach neglected boys nautical skills, was anchored off the north-eastern end of the island.  The girls were also expected to cultivate parts of the island to provide vegetables for the inmates.

The establishment of reformatories was seen as an advance on imprisoning underage females in the normal gaols.  However, mixing orphanged, neglected and criminal girls together, and placing them in a location still associated in the public mind with convicts, in close proximity to a shipload of youths, was not a recipe for reform.  In theory a high fence kept them separated from both the boys and the industrial activities of the island’s dockyards.  In practice, reports of the girls’ behaviour were often hair-raising.  Staff were untrained and unsuitable, and when the institution was inspected during a Royal Commission into Public Charities of 1873-1874, no evidence of training was found, but plenty to indicate a dysfunctional organisation, with evidence of “prostitutuion”and ill health, and that the girls were sometimes beaten.  Some of the girsl were mere infants.

This investigation was designed to acknowledge new thinking which was embodied in the State Children Relief Act 1881.  observations of the English reformist sisters, Rosamond and Florence Hill, who gave evidence and visited various institutions including Biloela, were published in “What We Saw In Australia”, (London, 1875).

In 1880 the girls were removed from Cockatoo Island to a new facility in Watsons Bay.  The new act introduced the boarding-out system which provided government funding to private individuals to care for chilren.  Many of these children were destitute, not orphaned.  Eventually, support was paid to parents willing to take responsibility for their own chilren.  Many would possibly have welcomed this option in earlier decades.

Information courtesy to the Dictionary of Sydney.